China's record oil imports in March helped it top the U.S. as the world's biggest buyer during the first quarter as stockpiling and aggressive buying by refiners coincided with slumping domestic production.

The most important market news of the day.Get our markets daily newsletter.

The world's largest energy consumer imported 9.21 million barrels a day, up 11 percent from February, according to Bloomberg calculations based on data Thursday from the General Administration of Customs. Shipments during the first quarter rose 15 percent to almost 105 million tons, or about 8.5 million barrels a day. The U.S. imported almost 8.15 million during the first three months, Bloomberg calculations using weekly data show. 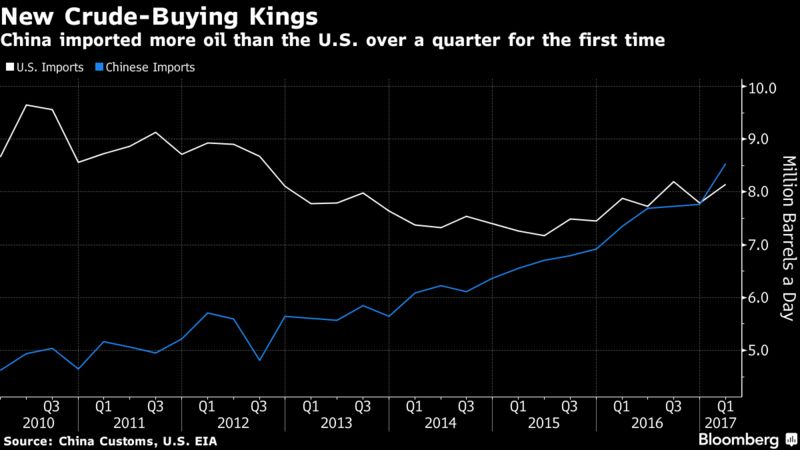 While the jump in March was seen as temporary, growing use of transportation fuels, new refineries and an expansion of emergency reserves have put China on a steady rise toward challenging the U.S. as the world's biggest importer. Buying last month was likely boosted by stockpiling and purchases from the country's independent oil refiners, which raised their processing of imported crude to a record last month, according to analysts from ICIS China, Citigroup Inc. and Energy Aspects Ltd.

"We could see a sharp drop in April following this surge," Li Li, a research director with ICIS China, said by phone.

Please read the rest of the article from Bloomberg here.